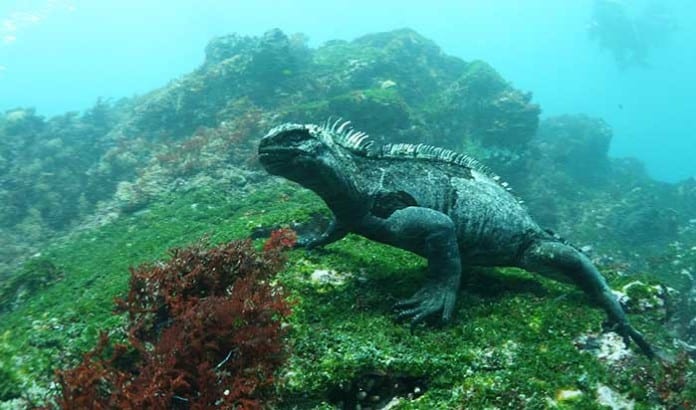 Galapagos Marine Iguana, also known as Amblyrhynchus cristatus, is one of the unique iguanas. These lizards are mainly found at rocky shore of Galapogos islands.

There are many different types of iguanas and marine iguanas are one of the most unusual of them all. In fact it wasn’t until the early 1700’s that the first reed of marine iguanas was ever found. They were discovered on the Galapagos Islands and by the famous explorer Darwin, of which he wasn’t too impressed and considered them as being ugly foul creatures. Since then, their number have depleted enormously due to the regular human contact on the island throughout the last couple of centuries. This article will endeavor to discuss everything there is to know about marine iguanas so that people can better understand the struggle they are going through as an endangered species.

Before humans set foot in their natural habitat, marine iguanas flourished in numbers and in fact were too many for the island. Like every iguana the marine iguana is a vegetarian and fed from a variety of plants that inhabit the islands of the Galapagos. They spend half the time in the water and half out. In order to keep their skin from drying out this is a necessity. They are also a reptile and therefore require a lot of sun to warm their naturally cold blood.

The next humans to come to the island of the Galapagos were US troops in World War II as they attempted to stop the Japanese onset that was going on at the time. Like the Japanese this was also a bad time for the marine iguana as many US soldiers used them as target practice and severely decreased their numbers in a matter of years. Once the most seen creature on the Galapagos, the marina iguana was rarely seen.

Unable to make a comeback by themselves, it looked like the marine iguana was set to become just victim of human interaction. That was until a group of people found out about their dwindling numbers and decided to put an end to it and bring them back from the brink of extinction. A team of scientists from the US set up camp and started a study on the reason why their numbers were depleting so fast and what they could do to change this.

The results of this study were amazing to say the least. Marine iguana numbers steadily began to rise as awareness increased throughout the world about the animals of the Galapagos. Although their numbers are rising once again, it’s still important to realize that they are still endangered animals and we should all make sure we don’t let them vanish from the face of the earth ever again.

The lizard is truly unique and may need human attention and protection.

If you want to know more about Iguanas including free information, reviews and much more, then please visit http://www.iguanainstitute.com