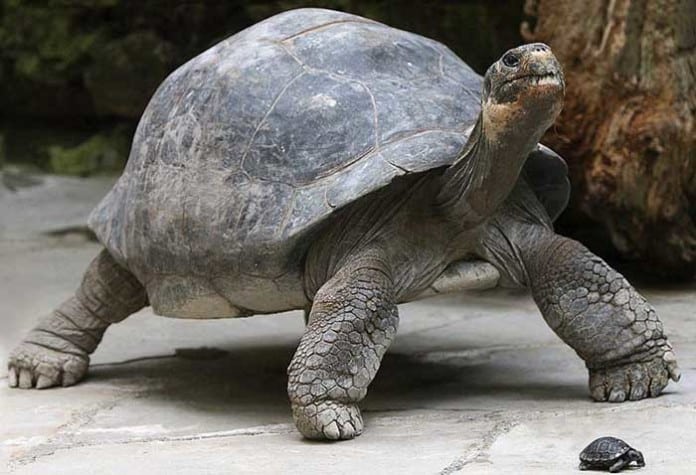 Gentle giants, the rare and endangered Galapagos Tortoises are the largest tortoise species in the world. Spotted by Bishop Tomas de Berlanga, when he discovered the Galapagos Islands by accident in 1535, these islands were named after them. Galapago which means ‘saddle’ in Spanish refers to the tortoise’s saddle-shaped shell.

Growing over four feet in length and weighing in at roughly 500 pounds, these huge vertebrates have an impressive lifespan. The oldest Galapagos Tortoise was said to have lived for 152 years. However, the exact lifespan of these huge reptiles is yet to be determined as they have not been observed long enough. Another interesting fact about the Galapagos Tortoise is that they keep on growing for 30 to 40 years before they reach adulthood.

A strong population of over 250,000 in the early 19th century, today there are between 10,000 to 15,000 Galapagos Tortoises left in the wild. Innocent victims of poachers, these endemic tortoises have also been captured and killed by sailors and pirates for their meat. Another reason for a dwindling tortoise population has been attributed to the introduction of new mammal species on the islands such as goats, pigs and dogs, which step on or eat tortoise eggs, or feed off the same vegetation as tortoises do, thus causing food scarcity.

Having been reduced to near extinction, presently just 11 of the 15 tortoise subspecies exist in the Galapagos today. And while research has shown a likelihood of just 13 subspecies, many scientists believe that there were 15 Galapagos Tortoise species in total. Five subspecies of tortoises can be found on Isla Isabela, while the other six can be found on the islands of Española, Pinzón, Pinta, San Cristóbal, Santiago and Santa Cruz. It is more than likely that the tortoise subspecies on Isla Pinta will die out soon as only one male tortoise remains. Lonesome George, as he is affectionately known, is the last of the Pinta tortoises. He is currently being kept at the Charles Darwin Research Station on Isla Santa Cruz in an effort to help him mate. However, so far all attempts have been unsuccessful.

While there are different subspecies of Galapagos Tortoises, there are also different types as well. Differentiated by their size, color and the shape of their shells, one can spot three different kinds of Galapagos Tortoises. Dome-shaped tortoises have shorts limbs and necks, while their shell have a round or dome shape. Saddle-backed tortoises on the other hand have longer limbs and necks with a raised shell. The third tortoise type is known as an intermediate tortoise and is a mix between a saddle-backed and dome-shaped tortoise.

Living on a diet of fruits, cacti, grasses and vegetables, Galapagos Tortoises are herbivores. They are able to store water and food in their bodies letting them live for up to a year before they eat or drink again. Mostly found in elevated areas where the humidity is higher and there are grassy fields, many subspecies of tortoises also live on dry hotter islands where grass is sparse. Playful by nature, these cold-blooded reptiles spend much of their day basking in the sun, while at night they rest half submerged in either mud or water to stay warm.

Incredible creatures, the Galapagos Tortoises today have played a key role in helping us understand how our world has evolved. Capturing the hearts and minds of all those who visit here, these gentle playful creatures should be taken care of so as to preserve them for all future generations to enjoy.

Charles Darwin and the Giant Tortoise

Setting Up Reptile Terrarium for Snake