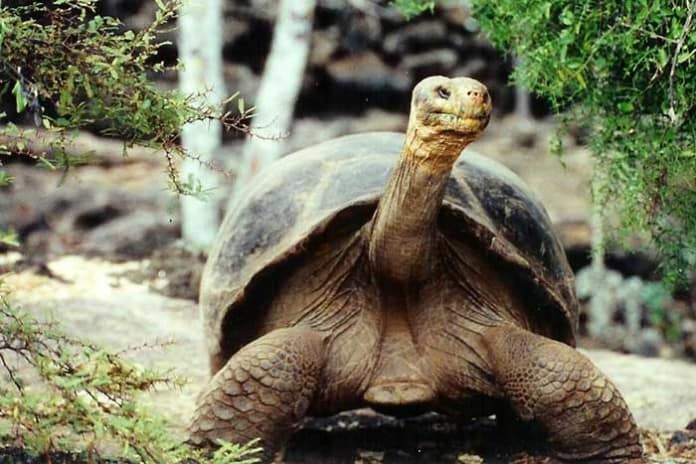 Charles Darwin is most famously known for his theory of evolution. He is less known for his 5 year voyage (1831-1836) around the world as an anthropologist.

Below, is an excerpt from his diary of this journey, describing the unusual behavior of the giant tortoise on the Galapagos islands. It also describes Darwin’s early 19th century methods of study, which were perhaps “a little” different than today’s.

We arrived at James Island. Mr Bynoe, myself, and our servants were left here for a week, with provisions and a tent, whilst the Beagle went for water.

We found here a party of Spaniards, who had been sent from Charles Island to dry fish, and to salt tortoise-meat.

About six miles inland, and at the height of nearly 2,000 feet, a hovel had been built in which two men lived, who were employed in catching tortoises, whilst the others were fishing on the coast. I paid this party two visits, and slept there one night….

While staying in this upper region, we lived entirely upon tortoise-meat: the breast-plate roasted with the flesh on it, is very good; and the young tortoises make excellent soup; but otherwise the meat to my taste is indifferent.

Mr. Lawson, an Englishman, and vice-governor of the colony, told us that he had seen several so large, that it required six or eight men to lift them from the ground; and that some had afforded as much as two hundred pounds of meat.

FRESH WATER AND THE TORTOISE

I have already shown, from the numbers which have been caught in a single day, how very numerous they must be. Some grow to an immense size: The old males are the largest, the females rarely growing to so great a size: the male can readily be distinguished from the female by the greater length of its tail.

The tortoises which live on those islands where there is no water, or in the lower and arid parts of the others, feed chiefly on the succulent cactus.

The tortoise is very fond of water, drinking large quantities, and wallowing in the mud. The larger islands alone possess springs, and these are always situated towards the central parts, and at a considerable height.

The tortoises, therefore, which frequent the lower districts, when thirsty, are obliged to travel from a long distance. Hence broad and well-beaten paths branch off in every direction from the wells down to the sea-coast; and the Spaniards by following them up, first discovered the watering-places.

When the tortoise arrives at the spring, quite regardless of any spectator, he buries his head in the water above his eyes, and greedily swallows great mouthfuls, at the rate of about ten in a minute.

The inhabitants say each animal stays three or four days in the neighborhood of the water, and then returns to the lower country; but they differed respecting the frequency of these visits.

The animal probably regulates them according to the nature of the food on which it has lived. It is, however, certain, that tortoises can subsist even on these islands where there is no other water than what falls during a few rainy days in the year.

THE TORTOISE AND THE HARE

The tortoises, when purposely moving towards any point, travel by night and day, and arrive at their journey’s end much sooner than would be expected. The inhabitants, from observing marked individuals, consider that they travel a distance of about eight miles in two or three days.

One large tortoise, which I watched, walked at the rate of sixty yards in ten minutes, that is 360 yards in the hour, or four miles a day–allowing a little time for it to eat on the road. …They were at this time (October) laying their eggs.

DEATH OF A TORTOISE

The female, where the soil is sandy, deposits them together, and covers them up with sand; but where the ground is rocky she drops them indiscriminately in any hole: Mr Bynoe found seven placed in a fissure.

The egg is white and spherical; one which I measured was seven inches and three eighths in circumference, and therefore larger than a hen’s egg.

The young tortoises, as soon as they are hatched, fall a prey in great numbers to the carrion-feeding buzzard.

The old ones seem generally to die from accidents, as from falling down precipices: at least, several of the inhabitants told me, that they never found one dead without some evident cause.

The inhabitants believe that these animals are absolutely deaf; certainly they do not overhear a person walking close behind them.

I was always amused when overtaking one of these great monsters, as it was quietly pacing along, to see how suddenly, the instant I passed, it would draw in its head and legs, and uttering a deep hiss fall to the ground with a heavy sound, as if struck dead.

I frequently got on their backs, and then giving a few raps on the hinder part of their shells, they would rise up and walk away–but I found it very difficult to keep my balance.

There can be little doubt that this tortoise is an aboriginal inhabitant of the Galapagos; for it is found on all, or nearly all, the islands, even on some of the smaller ones where there is no water; had it been an imported species, this would hardly have been the case in a group which has been so little frequented.

Michael Kerrigan is the author or co-author of over 200 books on history, politics and literature. This article is part of an extract from his book: Charles Darwin’s Voyage of the Beagle. The full extract can be read at http://www.browsebooksforfree.com/books1-3